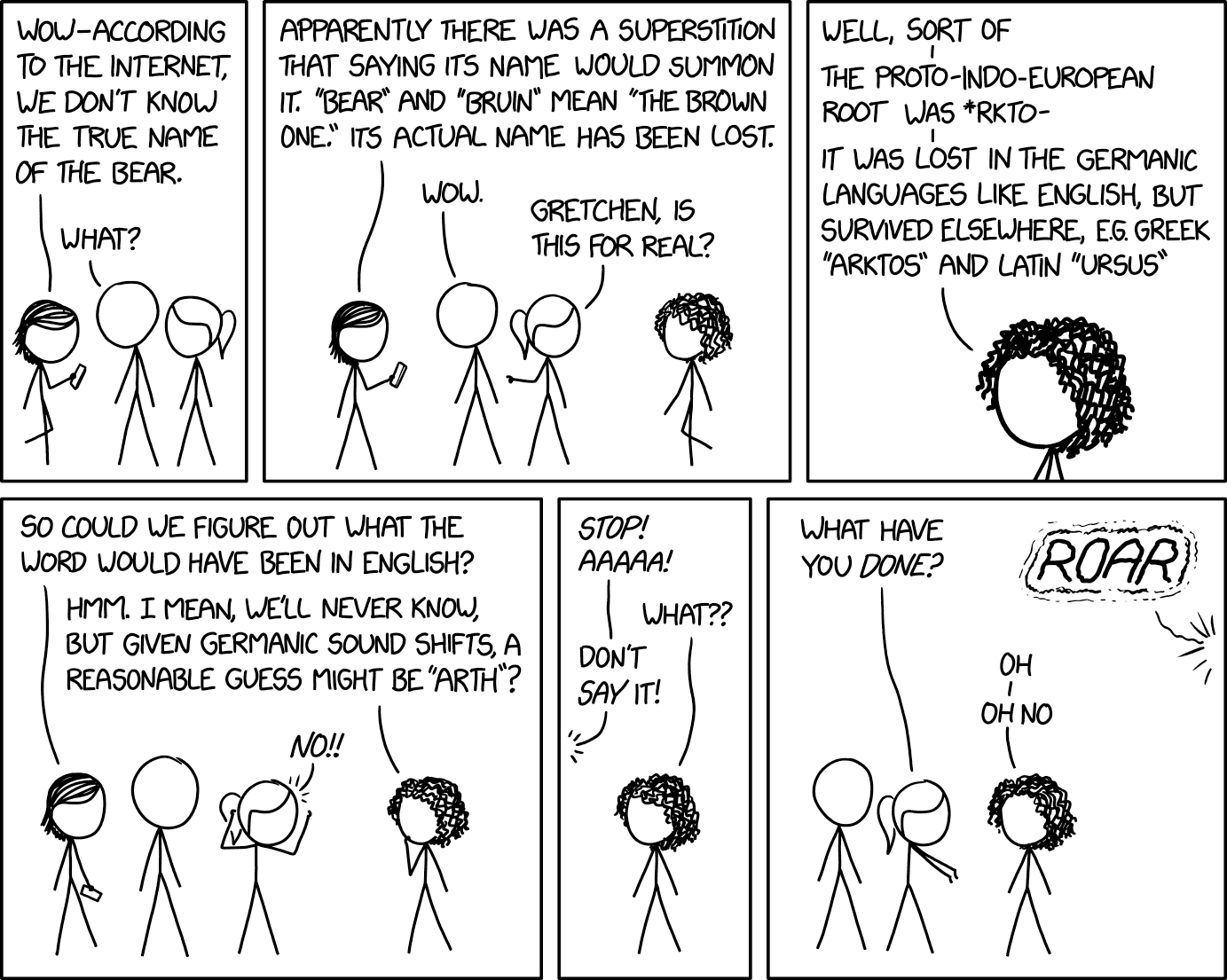 Image courtesy of XKCD / Randall Munroe: The True Name of the Bear. “Thank you to Gretchen McCulloch for fielding this question, and sorry that as a result the world’s foremost internet linguist has been devoured by the brown one. She will be missed.”

Some people binge TV Tropes; I binge The Online Etymology Dictionary. Here are three etymology facts that I think are pretty cool.

The “aus-“ prefix is weird and interesting. The word “austral” means “southern”, as in “Australia”, but the name of the country “Austria” (“Österreich” in German) means “Eastern kingdom” even though it’s to the south of Germany. And, wait, is the English word “east” also related?

In Latin, and in English words that derive from Latin, the “aus-“ prefix typically means “southern”, like in the words “Australia”, “austral”, and “aurora australis”. But its Germanic cognates, including “east” and “Austria”, mean “eastern”. All of these words come from the Proto-Indo-European root “aus-“, “to shine”, which presumably was associated with dawn (in which the sun arrives from the east). The German words retain this meaning, while in the Latin-derived words its meaning is rotated. How could such a shift have happened?

There are multiple theories - perhaps, over the centuries, Latin speakers associated “aus-“ words with the Italian peninsula’s orientation (in an unusually literal sense; “orientation” means approximately “easterliness”, “oriens” being the Latin for east). Since in fact Italy lies mainly along a southeast axis, this could have eventually shifted those words’ meanings to the south.

Image courtesy of the Wikimedia Foundation: Map of Italy

Etymonline also suggests that Latin “aus-“ words might be derived from the same “shining” root, but referring to a “hot, burning” quality of the south wind. This seems like a strange explanation to me - it would be surprising if some root word found its way into two cardinal direction words via unrelated paths. On the other hand it does seem that Latin “aus-“ words are especially identified with the south wind and not merely the cardinal direction.

Usually, words in languages derived from Latin (like French and Spanish) share Latin roots. Surprisingly in this case, modern languages that stem from Latin use words that are Germanic instead, like the English “south”: “sur” in Spanish, “sul” in Portuguese, and “sud” in French, Italian, and Romanian. It’s quite unusual for so many romance languages to completely abandon the Latin source for a word; nonetheless these words are all borrowed from Germanic languages (perhaps in embarrassment at the “aus-“ mislabeling fiasco?).

“Pea” derives from the earlier word “pease”, as in “pease-porridge”. It’s what’s called a “false singular”: People heard the word “pease” and thought it must be plural, because it ends with an “s” sound, so when they wanted to refer to a single green seed they thought they ought to use “pea” as the singular - but in fact “pease” was originally the same in both singular and plural (like “corn” or “sheep”).

It’s as though the adult world began treating the word “cheese” as plural, and asking for a “chee” when they wanted a slice.

Cheese is plural because you never eat just one chee

One might have thought that the word “Helicopter” had come from the Greek word “helios” for “sun”. But in fact it’s from “helix”! “Helicopter” originally referred to a fanciful proposed flying machine, intended to use a rotating screw to generate lift. When someone eventually invented a flying machine that worked (using rotating blades instead), the word got repurposed for the the thing that worked, even though there was only a notional helix involved, and the principle was totally different. 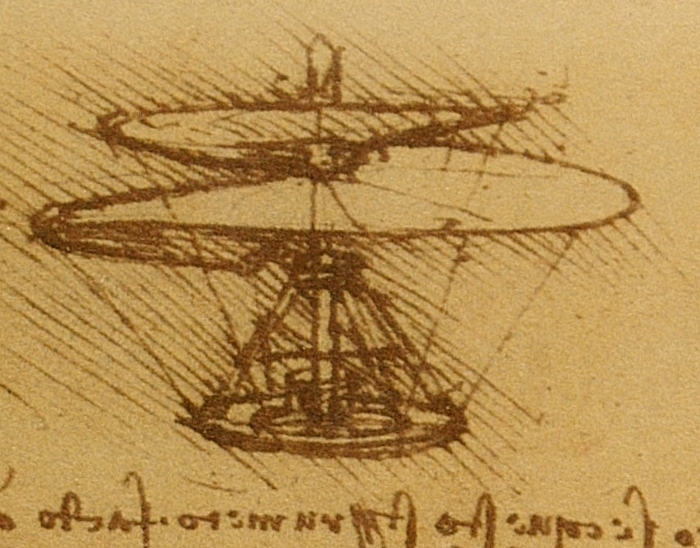 The “-pter” part of the word is from the Greek word for wing, “pteros” (also a root of “pterodactyl” and “archaeopteryx”). “Pteros” is related to “feather”, both coming from the Proto-Indo-European “pet-“ stem, which means “to fly”.

I find this especially interesting because people often seem to assume that the parts of the word “helicopter” are “heli-“ and “-copter” (for example in the words “heli-pad” and “roflcopter”), as though it might have something to do with Copts ascending to the sun, when in fact it’s about “helico-pters”: flying helices.

Thanks to Malo Bourgon and Benya Fallenstein for discussions that led me to look up some of these facts, and Katja Grace for editing help.